I am so excited that PIRATES OF THE CARIBBEAN: DEAD MEN TELL NO TALES opens in theaters everywhere TODAY! It’s been a long 6 years but Captain Jack is finally back and this is the perfect film for the whole family! 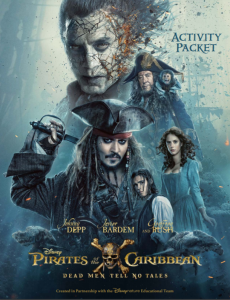 For Oscar® winner Javier Bardem, taking on the role of Captain Salazar was somewhat of a family affair. Bardem’s wife, Penelope Cruz, starred in the previous “Pirates” film, “On Stranger Tides,” and Bardem was a frequent visitor to that set.

There were 88 versions of Carina Smyth’s cherished diary before the one used in the film was finally settled upon. The covers are leather-bound, and  aging on the pages was done in an interesting method…by dousing them in coffee!

For his extensive makeup as the cursed Captain Salazar, actor Javier Bardem endured anywhere from two to three hours in the makeup chair each and every day. But when the beautiful Golshifteh Farahani was transformed into the mysterious sea witch Shansa, she required four to five hours!

The uproarious “shotgun wedding” sequence filmed at Hastings Point became a true family affair for Stephen Graham (Scrum), whose wife Hannah Walters—a talented actress in her own right—was asked by the filmmakers to portray Captain Jack’s would-be, not-so-blushing bride, Beatrice Kelly. Graham and Walters’ two spirited and adorable children, Alfie and Grace, played Beatrice’s two kids. And it was up to the talented hair and makeup departments to make the otherwise attractive Graham/Walters clan look as unappealing as possible!

See you at the movies!