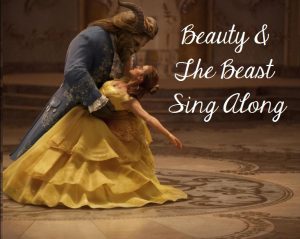 Beauty & The Beast Sing Along

Just when you think Beauty & The Beast couldn't get any better, they step you their A game in a serious way.  Starting this Friday, April 7th, fans of the worldwide box office smash BEAUTY AND THE BEAST will be able to sing along with their favorite characters when the “Beauty & the Beast Sing Along” hits approximately 1,200 theaters nationwide!

The “Beauty and the Beast Sing-Along” will feature on-screen lyrics to such beloved songs as “Belle,” “Be Our Guest,” “Gaston” and “Beauty and the Beast” written by eight-time Oscar®-winning composer Alan Menken and two-time Oscar-winning lyricist Howard Ashman and new songs “How Does a Moment Last Forever” and “Evermore” written by Menken and veteran lyricist and three time Oscar winner Tim Rice.

Disney’s live-action adaptation BEAUTY AND THE BEAST, in which the story and characters audiences know and love come to spectacular life, has become the highest grossing movie musical of all time.  The film’s soundtrack, which includes songs from the score performed by Ariana Grande and John Legend, Celine Dion and Josh Groban, has been equally as well received, entering the Billboard 200 chart at No. 3 and Billboard’s Soundtrack and Children’s charts at No. 1. The Beauty and the Beast Soundtrack is available at: http://disneymusic.co/BeautySndtrkP and wherever music is sold and streamed.

0shares
Thanks for subscribing! Please check your email for further instructions.
« Quick Interventions
Born In China »

A heart filter seems appropriate for a good hair d

🎉When is your 100th day of school? This set inc

Benny is so funny. He will only take a selfie with

👀 VIDEO time. 🍿 Such a fun activity for youn

With our amazing snow today, it was only fitting t

Do you want to build a snowman? ☃️ Swipe ⏩ t