So, if you follow my Facebook page (and you should!), you may have seen an article I shared the other day by Kara of ALLterNATIVElearning.com. The article was called Parenting Without Saying No, and it made some good points:
1. We say no too often and too easily.
2. Constant use of the word “no” isn't very effective.
3. Telling our children what not to do doesn't help them know what TO do.
4. Our children need to learn how to differentiate right from wrong themselves (over time, not as toddlers).
5. There's usually a more positive way to put something, rather than just saying “no.”

Honestly, this is good advice that many of us (myself included!) need to follow more often.

However, it's only one side of the story.

While I agree that most of us need to make more of an effort to train instead of just scold, there is also a definite time and place for the word “No.” Or even–dare I say it–for “because I said so.” (There I said it. And I don't feel bad either.)
As our children's parents, we aren't called to be liked or popular–we're called to be our children's parents. And sometimes that means saying no. If my children like me and are happy with me, that's great, but that's not really the point.
The truth is: our children need to hear no. Not all of the time, but sometimes. And here's why.

1. It Prepares Them for the Real World

Whether my son is in Kindergarten, college, or at his first job, when his teacher or boss tells him to do or not do something, he needs to listen. No arguing. No bartering. No asking “why?” There is a time to learn, but there is also a time for obedience. And personally, I'd rather he learn to deal with “no” now, rather than to learn the hard way later.

2. It Teaches Them They Can't Have Everything They Want

When kids get everything they want, they get entitled. And when they get entitled, they get selfish. And personally, I don't want to raise my children to be selfish, entitled brats who think they can just have and do whatever they want. (That may sound harsh, but whether you have toddlers or teenagers, you know the tendency is real and it can creep in quickly!)

Most of the time, I have a good reason for saying no, and I will give it. “No, you can't have a snack right now; dinner is almost ready.” “No, you can't play with your brother's truck; it's his turn right now.” Sometimes, however, the answer is no just “because I said so.” Because I'm a mom and it's my job to make the rules and figure out what is best. And that needs to be enough.

3. It's Effective (When Used in Reasonable Doses)

If my toddler runs towards the street, I'm not going to stop for a second to think about how to word my request politely. If he decides to start biting, I'm not going to sweetly say “Ouch, that hurts mommy. Please save your chewing for mealtime.” Sometimes a quick, stern “no” is needed to get a child's attention, especially in dangerous situations or when talking to a little one who doesn't know how to use his words yet.

And while putting things in a nice, positive way is great most of the time, if you're to the point where you don't feel like you can put your foot down and say “no” — that's a problem. When I tell my son no, I don't expect an argument, a reason, an attitude or anything else. I expect him to know that no means no and there's nothing else we need to talk about right now.

Yes, that probably sounds harsh, but can you imagine everything being up for discussion? Who's the boss here? I am.

The truth is, your children need you to explain to them what they can and cannot do and why. They need you to guide them into making their own decisions. BUT, they also need you to be parent enough to say “no” when necessary. It's not easy, but it's your job.

Which is harder for you: Telling your children “no” or taking the time to teach and explain? How old are your children? Do you think it changes with age? 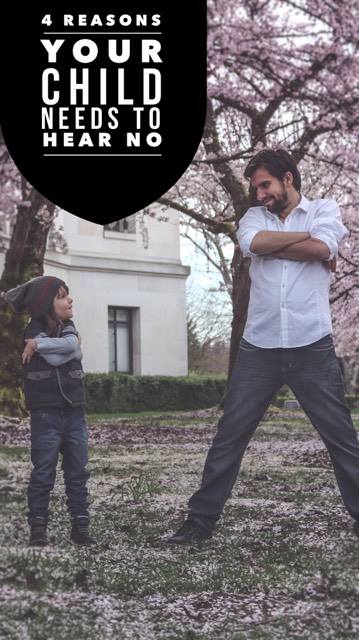